When you were a kid, did you ever play the doctor game? Just a few friends together in a quiet room. It is one of the few games boys and girls could play together. Before your mind goes a-wandering, I’m talking about the electric board game that buzzes when you touch the sides. Operation – “the whacky doctors game, batteries not included.” I used to love that game. I don’t think I ever owned it, but a neighborhood pal did. 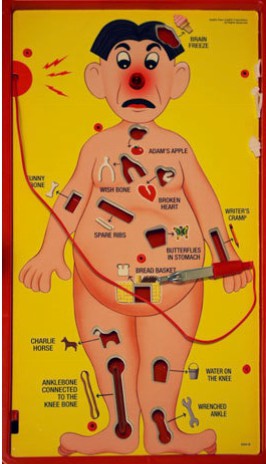 We aren’t allowed to have it in this home. When she was little, the concept freaked one of my daughters out so badly that she wouldn’t have slept had it resided under the same roof as her.

Although I have no medical training whatsoever, I would like to operate someday. I wouldn’t bluff my way into an operating room ala Frankie in Catch Me if You Can. I’m thinking more like a right place, right time scenario where I have to do an emergency tracheotomy while being given instructions by a tense doctor over the phone. Or does that only happen on television?

Seventeen years ago, I thought my surgery had arrived. Labor came quickly for daughter # 2. I pushed our little mini-van to its limit getting to the hospital and barely made it. She was born eighteen minutes from the time I wheeled momma through the door. Rats! Well, maybe that would have been a poor choice of first operations. Those stakes were very high and that patient was pretty surly – made even angrier by the fact that an unnamed person didn’t get her to the hospital in time for an epidural.

I totally could have done it, though.

I now have an app on my phone from the Red Cross to guide me. It’s a decision tree that asks questions to diagnose basic maladies. If you answer “yes” to more than one it almost always tells you to call 911. When I read the questions to someone, I don’t panic and my voice remains very calm and assuring – which makes feel like I’m pretty much a doctor.

A second opportunity presented itself recently. My brother-in-law started having pain in his abdomen. Rather than come to me, he went the traditional medicine route and was told he needed his gallbladder removed. Disappointing. After scouring the internet for the actual location of the organ, I decided this was my chance.

He seemed very dismissive of my offer at first. In fact, he barely paid attention. I chalked this up to pain. He just couldn’t think clearly. When the date of the surgery came, the so-called “professionals” had a little trouble and couldn’t perform the operation arthroscopically. So they had to cut him open, which led to complications and a ten day stint in the hospital.

Serves him right. I could have done it. I even ordered a new Ginsu knife and everything. While a full recovery was not guaranteed, the billing rate was substantially less than the one he got and he would have been able to stay at home. Besides, just think of the joy he would have brought me.

So if healthcare costs have got you down and you are looking for a cheap, extremely dubious alternative, look me up. Unlike most docs, I will be waiting for you instead of making you wait.