Getting old sucks. Or maybe I should say, blows.

Yes, after crossing my 50th year, I have signed up for the ultimate test of bodily humiliation, my first colonoscopy. Yay! I had hoped to live-stream it, but my doctor forbade it. Actually he asked me to find another doctor, but I talked him out of it. I guess all those years of medical school strained out his sense of humor.

But I’m sure there are no colonoscopy jokes he hasn’t heard. Be proud, I didn’t even try them. Instead of cracking the “Aren’t you going to buy me a drink first” gag, I came up with another idea.

As I’ve always heard, the prep is the worst part and that starts at the pharmacy counter when you ask for your prescription. Why does she have to read it loudly to dozens of waiting customers?

Maybe you’d like to take the store’s intercom: “Cleanup on aisle 1 and Mr. Myers is having a camera on a stick crammed up his…”

Then I took it home and read what it entails. It’s a little frightening. Or… maybe it’s an opportunity. Like Wile E. Coyote unfurling his ACME blueprints, I’ve decided to make this colon blow a family affair. I mean, if you can’t share crap-splatters with your family, who can you share them with?

It actually started with the scheduling of December 13, which is conveniently situated between my two oldest daughters’ birthdays. Yes, one turns 24 on the 12th and the other 22 on the 14th. What says Happy Birthday louder than dad knocking you down on the way to the bathroom for a violent poo?

But to take things a step further, I want to bring the whole family in on the fun. After all, colonoscopy prep isn’t just for birthdays anymore. I’ve decided that I’ll spread the love around by not focusing my colorectal anger on one bathroom. No, I’m going to strategically attack each and every toilet in the house. No one is safe!

I feel slightly bad for the birthday girls who share a jack-and-jill bathroom between their bedrooms. But not bad enough to alter my assault plans. In fact, if things get bad during the night, that’s where I’m going. I figure it will make their birthdays even more special and memorable to be torn from a pleasant dream by the smell of dad’s intestines crying.

I even drew a map. 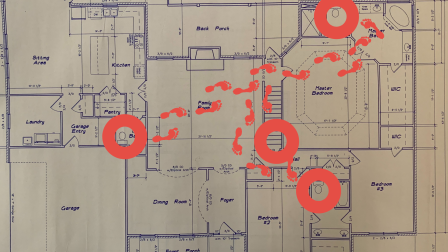 The basement and second floor bathrooms could prove tactically difficult, but I’ve got my headlamp ready and even if I have to low-crawl, I’ll make it.

5 thoughts on “My Evil (Colo-Rectal) Plan”