Portsong will never host a World Cup. Our only stadium is open air, mowed by livestock, and has no bleachers.  It would take too long to mark Hargit’s Field and we simply aren’t prepared for the crush of humanity that such a tournament would bring. I’m not one of those Americans who hates soccer. I really have no problem with it and would be okay if it took hold. With all of the kids playing and international flavor in the U.S., it really is amazing that professional soccer can’t seem to get off the ground. 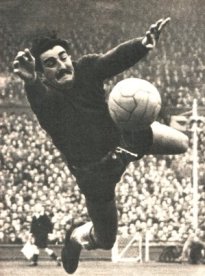 So what’s the problem? Why does the average football or baseball fan have such a disregard for the sport? Some say it is too slow. Okay, I get that – we like things fast and instant. But nothing is slower than baseball. When you have the league itself changing rules to speed up the game, you know you are in the paint-drying business.

Last week, I watched a little bit of Ghana vs. Germany and think I stumbled on a few things.

First, what is the deal with the goaltender wearing a different uniform? What makes that guy special – either you are on the team or you’re not! If they do that so the ref can tell who gets to touch the ball with their hands, they need new refs. Can these guys not identify one guy quickly enough to call a handball? They usually wear Mickey Mouse gloves anyway, which kinda stand out. No, the refs aren’t the problem. There is clearly some socialistic motive behind the goalie’s garb.

Second, the flopping. It has become a big topic of conversation around here. I have never seen grown, athletic men act like such drama queens in all my days. It is crazy how when their shin gets touched, their arms fly up wildly before they flop, drop, and roll. Have you further noticed that each victim assumes the same paralyzed position holding their knee until they realize the call didn’t go their way? Then instantly, they pop back up and resume play at full speed as if a good, old-fashion faith healer has smacked them on the forehead and made them well. Hockey and Basketball have instituted rules to punish such behavior. Since they have yellow and red, maybe soccer could give a pink card for flopping.

Lastly, it’s the low scoring and the fact that a game can end in a tie. Nobody likes that. Ties are like whacking off the last five minutes of a movie and saying The End. Somebody has to win!

I’ve come to the rescue with a simple idea that kills all three objections. Here is what soccer should do. If a player flops, he has to stay face-down on the ground motionless like a kid playing freeze tag until the guy with the big gloves comes over and tags him. Think about that! Empty nets while the goalies run all over the field bringing players back to life means higher scores. Motionless players make for built-in impediments – therefore, more contact – which leads to additional flopping and more speed bumps. Soccer has just become a high-scoring, contact sport, with frozen men lying face down all over the field! Genius.

And if anyone shows up in a different uniform, they have to lay down in the center of the field and balance the ball on their lips as a tee for kick-off. That’ll teach him teamwork.

If I can get to someone with this idea, we’ll have a thirty team mega-league in the United States by 2016.