From the archives of the Portsong Guardian, dated May 1924:

A great loss occurred in Portsong today. Mae Wilkin’s cow, Flossie, took ill several weeks ago and poor Mae found her hooves up in her pen this morning. Since Flossie routinely slept in that position, Doc Harkins is not quite sure of the time of death as Mae can’t seem to recall the last time she saw her upright. The old doc is quite sure she has passed, though.

The death of Flossie not only leaves an empty stall in Mae’s stable, it leaves a great loss to the farming community at large. In 1908, Mae’s late husband, Homer discovered Flossie had quite a knack for weather prognostication. While his peers mostly considered him a lunatic, Homer persevered in honing the skills of his heifer until he finally won over believers after she correctly predicted the great hailstorm of March 1910. 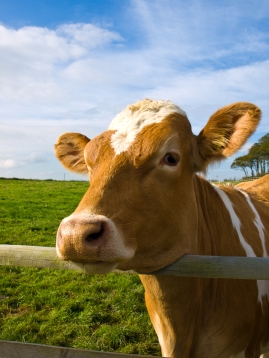 His description of her amazing talent was detailed in the transcript of a radio interview by noted Savannah broadcaster Edwin F. Teague:

EFT: How did you come upon the discover of her ability?

HW: I began to noticin’ she always worked her cud on the left. I thought that to be a might peculiar, so I asked her about it one day.

EFT: You talk to her?

HW: Why sure I do. I talk to all of ’em. It sooths ‘em to hear my voice. No good milkin’ ’em without talkin’ sweet to ’em first. They’d squirt out beans or nothing at all if they weren’t peaceful! Anyhow, she didn’t have no answer. But the nexday, just by chance, I noticed she were workin’ it on the right. On about noontime, the sky opened up and cut loose a fierce storm.

EFT: So you noticed a pattern after that day?

HW: Yesir. It happened thataway every time. In fact, when it got to be planting season, I went out to see which side she was chewin’ on before I did anythin’.

EFT: Did you have trouble convincing other farmers about this skill?

HW: At first. If I were at the feed store out yonder in Linkston, I’d tell ’em what the day held and they’d laugh at old Homer. But after I was right so many a time, they had to listen to me. When I told ‘em it were Flossie, they laughed at me until the big storm in 19 and 10 turned out to be the Mighty Hailer! They quit their laughing after that.

EFT: Yes, how did you get from rain prediction to a storm of such magnitude?

HW: Well, it goed like this. When I went out to the field that day to check the weather, she had her mouth filled triple full and slop were coming out both sides. So I know’d it were something unusual coming. I asked her if it were so and she just lowered her big, soft brown eyes to the ground and I knew. I went running around town tell folks to tie down the winders, ‘cause I knew a big ‘un was on its way.

EFT: She prevented a great deal of loss that day. Thank you for your fascinating story, Mr. Wilkins.

Ironically, directly across from the story on page 13 was the following advertisement: