I’ve never worn a necklace. I don’t mind them on men as long as they aren’t the Mr. T starter kit size. I have just never found one that suited my tastes.

In my first job, there was an accountant who had a chain so large it could be seen under his button down shirt. This was before the days of casual dress and this guy’s pendant literally pushed his tie an inch off his chest. I heard he got indicted for embezzlement after I left the company, which should be a lesson to us all – hide a big, gaudy chain under dress clothes, go to jail.

I did have a quest for the perfect necklace, though, and along the way I recruited a partner. I am not a surfer, but if I ever found a shark’s tooth on the beach I would get it set on a leather chain and wear it. I know you can buy them, but it isn’t the same as finding one in the sand on a morning walk.

On our annual trip to the white sands of Florida, Kylie and I would scour the beach for a shark’s tooth. She was the only other morning person in the family and a willing cohort to any adventure. Shark-tooth hunting became an event for us – a big one for me, a little one for her. We often ran to what looked like our quarry, but upon closer inspection ended up to be shells or rocks. Sadly, we never found a shark’s tooth. We spent many mornings combing the beach. Neither of us considered that our Friday morning walk in the sand in the summer of 2013 would be the last chance to find one together. Those thoughts don’t ever cross your mind as the sun rises across the horizon and the warm surf laps at your toes. 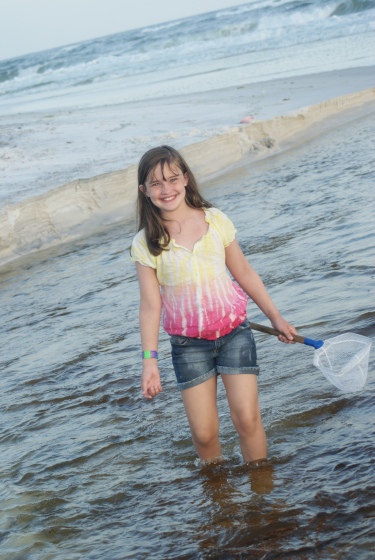 The consolation in not achieving a goal is that there is always next year. But that isn’t always true – next year isn’t a sure thing.

Those walks could be called futile in their result, but they weren’t. They are precious memories of time well-spent despite the fact that I do not own a shark’s tooth.

I do have a necklace, though.

It is nothing like I ever expected. A shark’s tooth makes one look manly – like a modern day pirate who extracted it from the beast barehanded and has a gaping scar across his ribs to prove it. That’s the story I would tell. But no, my necklace is not manly. And the scar that accompanies it is not visible.

My necklace contains three yellow beads strung on a leather cord. It cries wimpy… until you know its significance. For these aren’t ordinary beads. They are compacted flowers – making it even less masculine, if that were possible. They smell heavenly. The flowers that comprise them were collected from Kylie’s funeral – an event that ripped out my heart and left a scar that will never heal. Ironically, my beads rest just above that wound.

So we may not have found our shark tooth, but Kylie is a part of the only necklace I’ve ever worn. I love wearing it, too. It has become an item of comfort that often brings her image back to my lonely mind.

I love my necklace.

The big musclebound guy at the gym who chuckled at my feminine necklace may not be a fan. Thirty seconds into my explanation he was sobbing like a baby with all of his biceps and pectorals twitching and shaking uncontrollably. Any more questions, meathead?

So if you run into me, and wonder about my necklace, go ahead and ask. I’ll introduce you to my little girl who loved yellow and left me before we found a shark’s tooth to string.

22 thoughts on “A Necklace from Kylie”