A budding pyromaniac at the age of ten, I purchased a Zippo lighter at Taylor’s Drug Store unbeknownst to my parents. On a windy day, I used it to light some dead grass in the school yard, never considering the entire field was dry tinder. Of course, the situation got out of control and like any boy faced with potential capture, I ran. A neighbor saw the blaze and firemen put it out easily. Unfortunately for me, she had also seen the culprit and a policeman soon came knocking at my door.

It wasn’t my last brush with fire, but I must have been more careful after because I never had to talk to police again… about fire at least.

What is it with boys and fire? What causes the attraction? Maybe it is some primal urge to control the uncontrollable – a desire to harness heat and light that started when we were slaves to the elements living in caves. Maybe fire is irresistible because of its innate danger – it looks manageable but will burn you if you get too close like the redheads momma warned us about. I don’t know what it is, but fire has a strange allure all its own and men must learn to control our urges or be burned.

Men can sit mesmerized by a campfire for hours just staring into the flames. It’s a total guy thing. The cool air cut by its heat, darkness halved by dancing light. We burn things that aren’t supposed to be burned, tell stories that aren’t true, and in the wee hours we put the fire out as only a man can.

And what’s left when the burning is done? 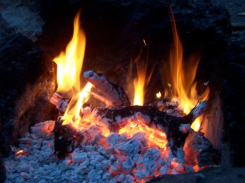 At the end of the night all we have are ashes and memories. Ashes represent total destruction of something tangible. What was is no more and in its place is black and gray soot. Ashes are dirty and have a particular way of sticking to everything they come into contact with and making that thing filthy too. Ashes are hard to remove – try as you might, they seem to get everywhere and when you think they are gone, some grit always remains.

Lately, I’ve heard tell of redeeming ashes. Charities and ministries have been built around the premise of exchanging beauty for ashes – that one’s life can be consumed by fire yet something beautiful can come of it.

But sometimes, to the one burned by the fire and sitting in its filthy remains, ashes are just ashes.

Whatever those outside the ring of protective rocks see as beauty can be unseen by those scorched. Perhaps after searing loss, the vision of the one burned is too much tainted by smoke and soot to behold what might become of their life’s ashes.

Ashes remind me of the story of Job. When his poorly named friends came to visit, we are told about the dumb things they said; but don’t fail to recognize their initial reaction to his suffering – because it was perfect. 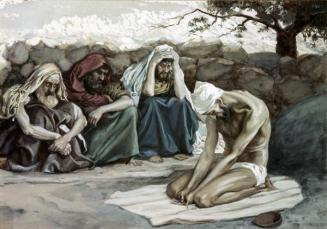 Then they sat down on the ground with him for seven days and seven nights with no one speaking a word to him, for they saw that his pain was very great.

For seven days, they sat silently in the ashes with Job. Seven days without a word – weeping the only sound. Patience. Peace. Endurance. Shared pain. Closeness. Beautiful friendship.

Whether you believe the Bible or not, Job’s friends are a good example for us. Their silence spoke volumes and they only blew it when they opened their mouths to speak.

If you know one who’s life has been burned by loss or heartache and you want to do something, join them quietly in the ashes… Sit your ash down and shut your ash up!

The soot will be hard to remove and the ground will likely be uncomfortable. The loneliness on that charred patch of earth is soul-jarring like no other. But one dealing with great pain needs your presence in the dirt, not your words in clean spaces.

*Post is in response to a friend who recently lost his son and has received well-intended “advice” on how to move on.

3 thoughts on “Sit Your Ash Down”