Something’s happened to Winston – our very old and very stupid lab. He is over 100 in people years and has never been accused of being brilliant during any one of those years. In his early days, we were forced to move his food bowl because he developed a phobia of heat returns that wouldn’t allow him to get near them. That bowl has been in the same place for a decade, but about once a month our genius forgets its location and has to go on a quest for discovery – like we’re hiding it from him.

Change is hard for Winston. We started getting cats a few years ago and he still doesn’t know if we have one or thirteen. He notices when a cat comes into his line of view. But if there are two of them in the room at the same time, he looks back and forth between them with as much of a bewildered expression as a dog can muster – as if wondering how the cat keeps moving so quickly from one side of the room to the other.

This is the beautiful mind we’re dealing with. In his old age, his fragile mental state has gotten considerably worse.

This mental downfall accelerated when we had to put down his cohort, Misty. It was sad for everyone, but that event pushed Winston over the rugged cliffs of sanity. Losing a pal he partnered with for thirteen years was a lot to handle. Predictably, he couldn’t. He began to wander around the house searching for her. When found, he would look up confused as to how he arrived. We truly suspect doggy dementia – which we discovered is a real thing called Canine Cognitive Dysfunction.

Along with the wandering, he began going outside more frequently. But half the time he never goes off the porch. He either seems to realize he just went out or have no clue as to what to do. There are times when he insists on going out 10 times in 5 minutes. That’s fun.

And everything is worse at night. His sleeping pattern has been reversed like a colicky infant.

Winston has become a team effort and one new member surprised us. Suddenly, our fat cat, Stanley decided to enter the Winston fray. It has truly become a sweet relationship. Stanley sits with him, talks to him, and guides him. That’s the funniest part. When Winston wanders down the hall, Stanley will follow him and nudge him back to the rug in the den. All the while he meows loudly as if comforting him. They lay together often and Winston even licks Stanley’s head from time to time. 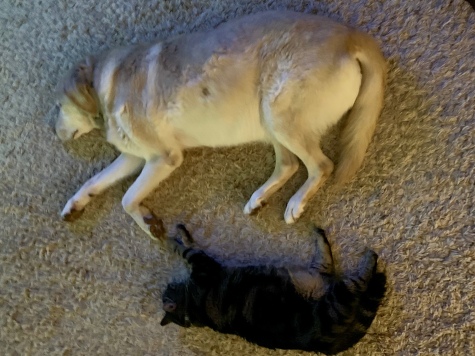 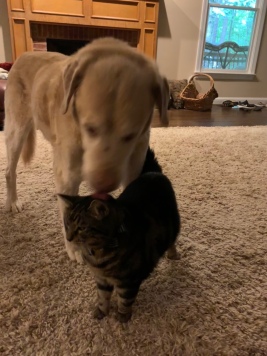 This is a shift in purpose for him. We got Stanley during Kylie’s cancer treatment because she wanted a fat cat to lay with her after chemo. He was the smaller of two massive cats at the shelter and she was afraid she couldn’t even lift the other one. So Stanley came home with us and became her Chemo Cat. He served that purpose well and now has another. 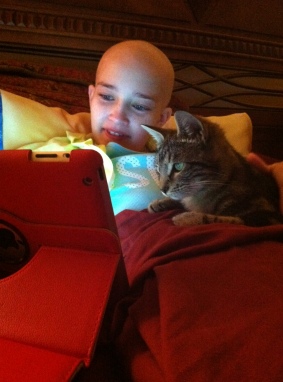 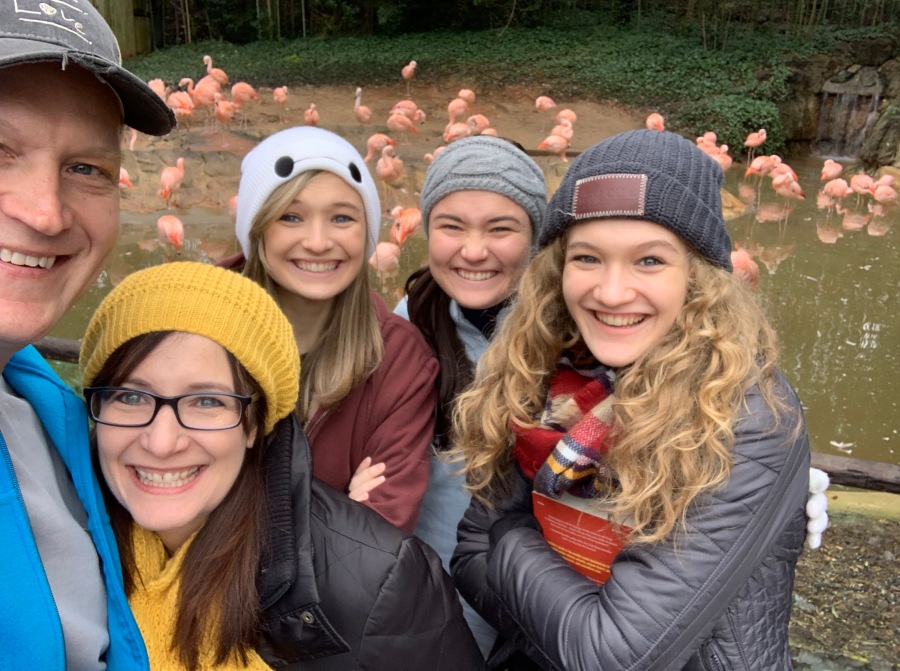 Just a follow-up to Zoo Church. Attendance was light because the weather was cold – fair-weather members and all. Some tropical animals were off exhibit, but we still had great encounters with the lions, gorillas, and pandas.

This little guy found a new way to ride.

The cutest red panda put on a show for us.

And we learned a valuable lesson courtesy of a mandrill I called Randy. The show he put on was not suitable family entertainment and my daughters were horrified with my interest. That spot of color you see in the picture is what you think it is – and Randy was very enamored with it. Every time he got within fifteen feet of a female, she ran away screaming. I felt like this was a useful example should any of us find ourselves attracting unwanted attention: bare teeth, scream, run.

No means No, Randy!

There’s so much to learn in this big world of ours, kids.