I’m not very successful at Twitter. I tweet under my character, Virgil Creech and mostly get ignored. But recently, one of Virgil’s best tweets was, “Boys will be boys, unless they can be pirates. Then, they’re always pirates.” It got a lot of likes and some retweets. It is fun to assume the personality of a raucous twelve year-old boy who doesn’t quite understand stuff going on around him. I might be 46, but I often don’t get stuff, either. Like on on this foggy morning.

I struggled on my run this morning. If you run, you understand that there are times when your body and mind don’t work together and it is tough to get going. Usually, it works itself out after a few miles. Not always. Today, I was struggling. Until my song came on. I have a song that pushes me to a sprint when it comes on the iPod. (It makes for a good Fartlek – which IS actually a word. Look it up, it is Swedish for speed play and always fun to add into conversations.) Ironically, my power song is, “He’s a Pirate!”

It is  one minute and thirty three seconds of fast-paced music. Better yet, the boy in me can pretend I am a pirate fighting alongside Jack Sparrow and Will Turner. I don’t always brandish my sword and scream as a run along the beaches with my mates. Not always. But, like I said, today was a tough run.

So to the two women who came around the blind corner today when I was racing to battle, I am deeply sorry I scared you. I was not after your booty as you might have feared, I was only charging to fight Davy Jones. 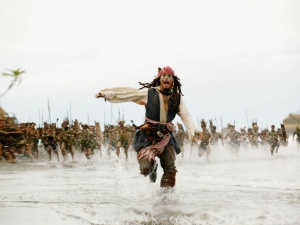 After all, I’m a pirate.