In the immortal words of Navin R. Johnson:

Things are going to start happening to me now!

Yes, due to life, it took a long time to arrive, but that lovable scamp Virgil Creech is back in Virgil Creech Sings for His Supper.

Even the idyllic little town of Portsong isn’t immune to the coming depression. What will our favorite family of eleven do when their chief bread-winner is left without a job? Enter the youngest son, Virgil Creech, who discovers an unlikely talent that may just keep the family afloat.

Meanwhile, half the world away, town grocer Harland Gentry discovers the truth of the ancient proverb, Pride goes before a fall. On the vacation of a lifetime, Harland decides to reinvent himself as a man of means, hoping to leave the small town behind. But he is not prepared for what he discovers on his unpredictable African adventure.

Of course, Virgil Creech Sings for His Supper contains a healthy dose of the lovable Colonel Clarence Birdwhistle, as he and Henry begin to rebuild the Lee family farm. All of these stories come together for another delightful romp through Portsong, the southern town halfway between Savannah and heaven.

From the back of the book, here is our new friend, Harland Gentry as drawn by Aprilily. 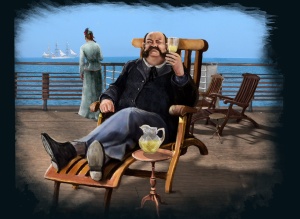 It is always rewarding to have someone read one of my books. But I was particularly excited to get a Five Bookworm Review on the first book in the series because it came from a kid, which is my target audience.  He is also not a family member!

You can read his take here.

If you haven’t had a chance to read Virgil Creech Takes a Swipe at Redemption, the ebook version is going to go free for a week sometime soon as publicity for the sequel. Of course, I’ll announce it here.

I wrote the final piece of the Portsong Series last year hope to release it fairly soon. I am now working on my first piece of adult humor and would love to put it out in 2015. We shall see if life gets in the way of that one as well.