I had someone tell me that the second year of loss is harder than the first. Naturally, I was dubious. After all, our first year without Kylie was devastating from every conceivable angle. What could possibly be more difficult than living in the recent aftermath of the loss of a child? Wouldn’t you assume that things would get a little better with the passage of time? I certainly did.

But there are stark differences between year one and year two.

In year one, you realize what a powerful thing delusion can be. The grieving mind plays tricks and dreams up scenarios where life is impossibly restored and you believe it simply because you want to – it is easier to believe than to live in reality. Memories pull you back to simpler times before the loss as a coping mechanism. Additionally, the tremendous shock of the loss serves as a numbing agent to the depth of pain and longing involved in the tragedy. I don’t know how long experts would say that shock lasts after such an event, but it slowly peters away.

In year two, the shock and delusion give way to a mechanical rhythm of life – a forced carrying on. The mind is more balanced yet still somewhat addled. In year two you are left to function without the one lost and without the unreasonable hope of their return. Reality sets in.

Never is a long time. 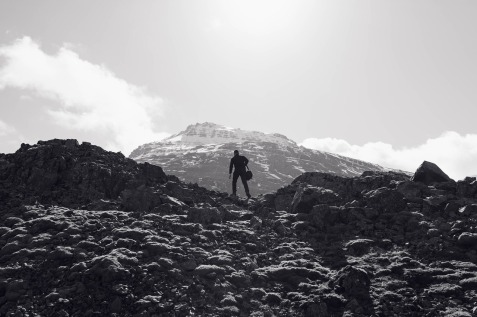 Year two brings with it a rock of permanence that sets down in the middle of your path and seems entirely unscalable. You can go around it, but that is simply avoidance. Many choose that route for varying lengths of time. Avoidance leads you around in circles with the rock always nearby – always within arm’s reach on the left. You run your fingers along its hard surface and bang your shins on boulders that have fallen unseen on your path. With every step, the rock remains in your view and reminds you of the loss.

Even if you do choose to avoid it, the rock looms in your future and cannot be continually bypassed. It is never leaving the path and must be climbed, although by its very nature you cannot reach the lofty summit –  it is too high. It is permanent. She’s gone.

Some days the rock is a gentle hike – equal ascents and descents where timely encouragement holds your hand and guides you along on your way. Hard moments resolve into passable lanes and storms break just in time to allow passage. But other days hold a foreboding shear face that requires deft fingers, footholds, and ever-so slow progress. The mocking wind at your back is a constant whisperer of the futility of your climb.

“You aren’t strong enough,” it shrieks.

“When you fall, others will see and they will fall too,” it whistles by your head.

And sometimes, you believe its lies.

I was wrong. Year two is harder.

So how do you keep going? How do you shut out the lies of the wind and set aside the futility of the climb?

That may not be helpful, but it is what I am learning. There is no formula. It takes slow, dogged effort to keep moving forward. One finger grip, then another. A step and then one more. Certainly there are setbacks and falls. I chalk my hands to improve friction one moment and then wipe stinging tears from my eyes – rendering the chalk ineffective. But when one day brings a fall, I push to regain ground the next. And some days are hard. Some days I give myself license to stop – to make camp on the rock and gain no ground before setting out again.

Sometimes I turn and look away, out over the beautiful woods and lush valleys that others get to trod and I remember the green days of life. But it can never last long enough because the damnable rock is still there, with its massive, shear face. And the wind is still whistling its lies in my ear. And I can feel utterly alone even when surrounded by hundreds of genuine people who love me. Such is the nature of struggling through loss.

As with anything practiced daily, my climbing skills are growing. My guess is that year five might be worse and year twelve might have a massive peak of its own. I miss Kylie daily and when I am at mocked by the wind and exhausted from the climb, I am reminded that every inch of ground gained on this infernal rock is one inch closer to her.

That keeps me climbing even on days when my progress is miniscule.

*Feature image is Kylie on Stone Mountain with sweet Carolyn, a survivor of the same cancer that took Kylie’s life.

35 thoughts on “The Rock of Permanence”