It’s been a while since we visited Portsong. As its Mayor and chief historian, I feel neglectful that my fine little town has been pushed aside for the hustle and bustle of modern day. In searching through an old steamer trunk that is the town archives, I found this issue of the Portsong Guardian.

It wasn’t in the best of condition – with torn edges and water stains. After I got over the putrid odor of mothballs and something that mysteriously smelled like lima beans, a quick scan took me back to simpler times to recall the era when the county fair was the most important event of the summer. Of course, small towns have their share of jealousy and competition. But in the end, harmony and community seem to win out.

Join me on the front porch and remember your county fair as I read the report of Portsong’s fair of 1921. 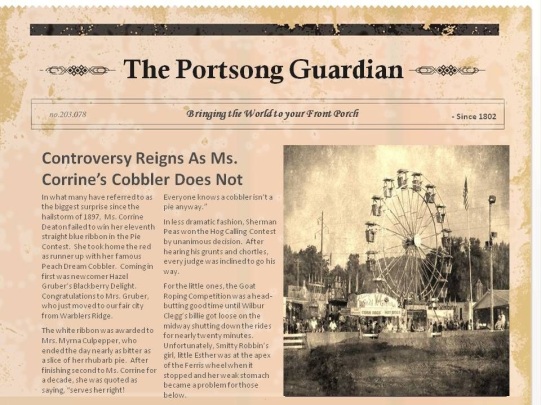 Controversy Reigns as Ms. Corrine’s Cobbler Does Not

In what many have referred to as the biggest surprise since the hailstorm of 1897, Ms. Corrine Deaton failed to win her eleventh straight blue ribbon in the Pie Contest. She took home the red as runner up with her famous Peach Dream Cobbler. Coming in first was newcomer Hazel Gruber’s Blackberry Delight. Congratulations to Mrs. Gruber, who just moved to our fair city from Warbler’s Ridge.

The white ribbon was awarded to Mrs. Myra Culpepper, who ended the day nearly as bitter has a slice of her rhubarb pie. After finishing second to Ms. Corrine for a decade, she was quoted as saying, “Serves her right. Everyone knows a cobbler isn’t a pie, anyway!”

In less dramatic fashion, Sherman Peas won the Hog Calling Contest by unanimous decision. After hearing his grunts and chortles, every judge was inclined to go his way.

For the little ones, the Goat Roping Competition was a head-butting good time until Wilbur Clegg’s billie got loose on the midway, shutting down the rides for nearly twenty minutes. Unfortunately, Smitty’s Robbin’s girl, Little Esther, was at the apex of the Ferris wheel when it stopped and her notoriously weak stomach became a problem for the goat wranglers below. Order was quickly restored and Little Esther returned to the soil she had soiled with and empty stomach and three empty cotton candy sticks.

Mayor Earnest Shambley declared this year’s fair to the be the finest yet in a lengthy speech that ended when he realized he was alone save for Bess Lively, who he nudged awake.

The Fair Organization Committee is still looking for folks to clean up Hargett’s Field so Old Man Hargett can set his cows to graze again. There will be a potluck supper after Sunday church for all those who volunteer.

For those of you who might be new around here, the 1920’s sleepy southern town of Portsong is the setting of my first literary endeavors. Our young friend, Virgil Creech still hasn’t quite gotten things right, but he’s getting better and having a ball in the process. 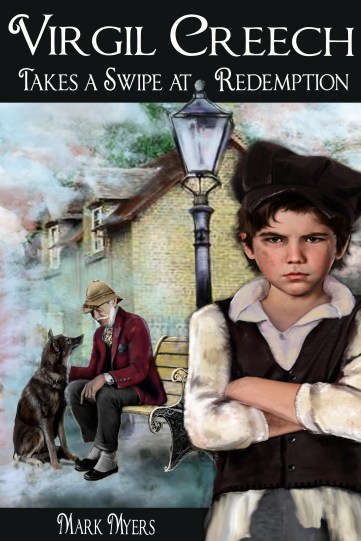 4 thoughts on “Back to the Fair”