During a recent visit, my friend pulled out his tablet and challenged me to a game of checkers. Like most of our games, it was preceded by a good bit of smack-talk. Unlike most, I actually had a shot at winning this one because it didn’t involve a controller or hand-eye coordination. Truthfully, I didn’t want to win.

My nemesis made early blunders. He missed jumps and backed himself into corners where my only move was to jump him. I had to work very hard to lose a couple of games and not make it obvious because he would have called me out on that. Honestly, he was lousy at checkers. But in life, he was one of the greatest.

I met “The Greatest” once. Being from Louisville, I grew up watching Muhammed Ali box and was a high school freshman when he visited his alma mater. His title was self-proclaimed and debatable but with 37 heavyweight knock-outs, very few people would dispute his claim.

Literally hundreds throughout history have laid claim to the moniker, “the Great.” We study Alexander the Great, Catherine the Great, and Peter. But have you ever heard of Akbar, Hanno, or Conrad the Great? Likely not because their time in history wasn’t enduring and many of their empires don’t exist any longer. These great ones claimed the title through military power, tactical success, or family lineage. That’s not true greatness – just intimidation.

So who is great? How does one achieve greatness?

I would argue greatness for people such as Martin Luther King, Jr., Mother Teresa, the Apostle Paul, Mahatma Gandhi, Abraham Lincoln, Marie Curie. The list could go on. But what do they have in common? In a nutshell; each overcame tremendous obstacles put in front of them, never shied away from challenge, disregarded personal pain, and fought for the betterment of others.

It has become common for a family dealing with childhood cancer to create a name to rally support: Praying for Annie, Jacob’s Army, Smiley for Kylie. While we were in treatment, I heard about a local kid whose group name was Robert the Great. At the time, it made me chuckle… “the great.” Kind of arrogant, isn’t it?

When I first met him, I thought he was a little doughy and goofy, but he came off as a very sweet kid – the rare kind of preteen who could engage with adults. Soon I found myself wanting to see him again because there was something that drew you to him. He held a presence, an indescribable joy, a warmth. He was magnetic.

Diagnosed with what should be the most treatable form of childhood cancer, Acute Lymphoblastic Leukemia, at just 6 years old, Robert’s childhood was consumed by cancer. In the eight years since his diagnosis, Robert endured 800 rounds of chemotherapy, 65 spinal taps, and countless surgeries trying to beat his cancer – all of which left his body a mess. Most of us will never experience that kind of medical regimen and few could handle it. Robert’s daily baseline for pain would be intolerable for most adults. Yet this boy was cheerful nearly all the time.

Asked about his cancer recently, he said with a smile, “I don’t know much about it, but I know it won’t go away.”

He then proceeded to whip me at Mario Bros. 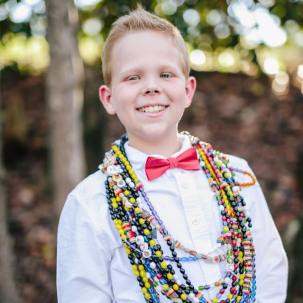 Robert and I became friends. I was fortunate to spend time with him in life and to be able to make a few visits with him as his health declined. I watched him be so intentional in his thanks to his mother, father, and caregivers. He expressed gratitude in little things, but he spoke slowly and carefully and I believe he was thanking them for their years of loving care. While most fourteen-year-olds won’t show the slightest affection to their mother I watched Robert engineer a special birthday celebration for his mom from his hospital bed just days before he died. I also heard him say, “I love you” to people as they left his side.

I don’t know at what point he knew his life was coming to an end, but I realized that the knowledge didn’t really change the way he lived. He wasn’t kinder in his last hours – because he already lived a kind life. He didn’t become more loving –  because he always expressed love readily. When he learned he would soon die, he didn’t change… he just kept being Robert. We’re all terminal. Robert the Great somehow knew to live that way.

Theodore Roosevelt said, “The boy who is going to make a great man must not make up his mind merely to overcome a thousand obstacles, but to win in spite of a thousand repulses and defeats.”

Those words haunt me. They are so true and never more embodied than in my friend, Robert. He climbed every obstacle in front of him – more than you and I will see in our lifetimes. Yet he will never grow to become that man. Damn cancer.

Robert was great. And with his loss, this world is a little less so.