And I was immediately struck with anger.

But still, I couldn’t shake the discomfort that rung in my head over that status. Ebola seems far away, after all, it’s only been diagnosed four times in the US. It’s easy to tuck it away in your mind as something distant that doesn’t affect you and forget why it’s a big deal.

It’s even become a hot topic for jokes on social media: 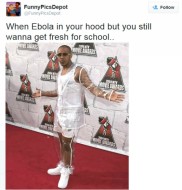 Because so many see this very real disease as a far away concept, we find safety in our distance and it’s easy to make light of it.

The idea of disease never really hit home for me until my little sister was diagnosed with cancer. Yes, Ebola and cancer are two very different things. But I know what it’s like to watch someone I love very dearly suffer. I know what it’s like to hold my sister’s hand while she cries because she can’t escape the pain or the fear that comes with her disease. I know what it’s like to cry myself to sleep begging God to take her illness away. And I can’t help but imagine a sister somewhere in Africa in a situation very similar to my own, watching her loved one suffer, hearing her cries, and begging for it to all be over- but without the blessings of medicine and technology that my sister has access to.

We are quick to throw on our pink gear for breast cancer awareness and dump ice on our head for ALS because that kind of awareness is fun and easy. I’m not trying to diminish those causes- they are great causes that deserve promotion. But I mean to make note of the fact that when another very real disease with very real consequences is brought to light and gains awareness, people groan that it’s in the news again and make jokes about it on the internet. Because Ebola doesn’t have the fun and cute promotional package, we complain and make light of it and its need for awareness and a solution.

People are suffering and dying from Ebola. Just because that suffering seems far away, doesn’t make it any less significant.

This is a guest post from my oldest daughter, Meredith. I begged her to let me post it.

27 thoughts on “Death at a Distance”