I remember when we worked with the builder to draw up the house plans. After having the master bedroom over the garage in our first house, we decided to separate the two when we built our current home. I’m glad of that – especially since we now have teenagers who come and go long after I’ve retired. There might be someone out there who is less than happy about the distance between the two, though.

A humid day brought out the potential flaw in our design.

That brings us to a recent Sunday. It was a hot day – the kind of day that is so humid you start to leak just from the exertion of crossing the threshold. I tried to beat the heat as best I could by hitting the pavement for a few miles before the sun came up. When I returned home, I entered through the garage and closed the door behind me.

I would like to state that at this point, I am inside my house – the garage being an enclosed extension of said domicile. Having had no cool down, I was still sweating at a champion’s pace. So I removed my hat and shirt, placing them neatly on the hooks provided to allow the moisture to wick in the garage. Sadly, I noticed a puddle still forming underneath me which inspired a moment of brilliance consisting of three observations: Short walk, dark house, family still asleep.

You get the idea. I made a very aerodynamic trek to clean up – through the kitchen, den, bedroom, all the way to the shower. Afterward, I felt much better and pointed my fully-clothed self toward the kitchen for coffee.

I am normally a rather unobservant bloke, but I did happen to notice an obstruction just outside our back door. A table had been moved and something wrapped in foil sat on top. Upon further inspection, it was a loaf of bread. Written on the foil were the words, “You are on God’s Mind. Jeremiah 29:11.”

During this past year of struggle and grieving, we have received many anonymous cards and gifts left on our porch from kind and caring friends.

However, on this occasion, I had to wonder at the timing. When was the bread placed on the porch? I know it wasn’t there when I left for my run. I hope it was left while I was out running or showering. But there is the possibility that the kind person with nothing but good intent instantly regretted leaving this gift.

Loaves of bread have been used Biblically to feed 4000, 5000, name the ultimate traitor, sustain prophets, and now…  Maybe this loaf was given as a warning from God himself. It was very good bread! Kind of his way of saying, “I see you – too much of you! I had to make clothes for Adam, but you have retail. Get thee to a seamstress!” 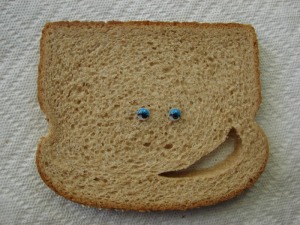 So if it was God, Thank you for providing me my daily bread.

If it was an encouraging friend, I would like to point out that I was in my own house. And while I might be on God’s mind, good luck getting that image out of yours.

12 thoughts on “Our Daily Bread”