We learn a great deal about ourselves when we are thrust outside our routine. Our true nature tends to hide behind habitual events until something out of the ordinary forces it out into the open. And then, sightly or unseemly, we must deal with who we are – our true selves, in plain view for the world to see. Put in such a situation, I recently rediscovered something I already knew about myself.

On Sunday, we held an outdoor event for which the weatherman promised 100% chance of thunderstorms. That turned into a few minutes of light showers that didn’t dampen the event one iota. It did, however, make cleaning up on Monday interesting.

One of the things I had to do was pack up a thousand or so stress-relief spheres to be used at future events. The problem being that some were soaked and some were not and it was impossible to tell which ones were wet just by looking. I had to squeeze each one and separate the wet from the dry. This forced me out of my Monday work routine for a few hours. 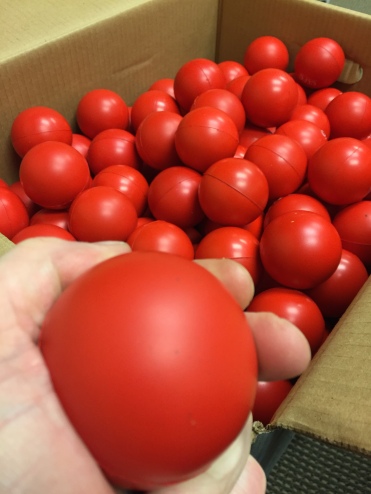 When given such a mundane task, the mind begins to wander… at least mine does. As I squeezed sphere after sphere, I began to giggle a childish giggle thinking of joke upon joke pertaining to my situation. Guys always appreciate good sphere humor – which ranks just under fart jokes on the Official Male Scale of Wit & Whimsy (OMSWW). Unfortunately, I have no guy at the office with whom I can share such humor. In taste and decorum, I could not share my comedic stylings with my coworkers. Also, I’m trying to pull-off this professional façade and really don’t want to deal with one of those pesky harassment suits.

I am nearly fifty – a mature man by proxy, right?

I sat in my office squeezing my spheres and giggling, teeheeing, and chortling.

But one can’t keep such hilarity to oneself forever. Male humor at this extreme bubbles up and must be shared before the risk of explosion becomes too great.

So I started texting my jokes to my wife in between squeezes and I laughed uproarious guffaws as each one went through. The text conversation was completely one-sided. I figured with the amount of funny I was sending, she was probably having trouble typing as she heaved in laughter or could no longer see through the veil of tears streaming down her face. Maybe Verizon limits the amount of funny someone can receive like data minutes and they were blocking my texts!

Finally, she replied with just five simple words: “You are 5 years old.”

And this is the fact I already knew about myself.

(Still confused, ma’am? Replace “spheres” with its more commonly used stress-relief moniker and you’ll understand. You can just roll your eyes and walk away now. But if you’re a man, “Yeah, I know. It’s freakin’ hilarious!”)

10 thoughts on “The Squeezing of the Sphere”