The call came about 11 am. Her voice told me immediately that we were at Threat Level 5.

We all have our call scales. Ours runs something like this:

Threat Level 1 – no threat, reserved for happy talk – “The kitten is being so cute.”

Threat Level 2 – potential threat, status uncertain but there might be blame – “Have you seen my hairbrush?”

Threat Level 3 – serious misdeeds by pets or children, these are problems, but passive in that I only have to moderate – “The kids are killing me today!”

Threat Level 4 – these are problems I have created. No examples will be provided.

Threat Level 5 – usually reserved for natural disasters, impending riots, police visits, or the horrors that occur when the wifi is out. When we hit Threat Level 5, I immediately grab my keys knowing that I am either going to have to hurry home… or the other way if I am the cause. But this time:

“Winston’s carrying around a dead chicken,” she cried with horrific drama in her voice.

This is one of those places where the male and female minds diverge. While she can’t see past the fact that there is a carcass, I begin the forensic analysis of where in the world Winston got the chicken. And how?

The first thing you have to know is that Winston is old – Very old and feeble. In fact, he has basically become a door stop with fur. He can’t hear anymore and his voice is just a raspy yelp now. Like an old man, he gets up early to make water, then settles onto the rug for a nice nap that basically lasts until bedtime.

So I’m thinking rationally, “there is no way Winston caught a chicken!”

But she is hysterical, “I’m looking at a chicken in his mouth!!!!”

To be fair, she is on the scene and I am not.

Then it dawned on me, our neighbors just got chickens… uh oh! Now I still do not believe that Winston is capable of climbing their fence, chasing a chicken and killing it. Also, as much of a pain as he is, he is a nice dog. Never once has he shown anger to the cats in his domain. I don’t believe he has ever killed anything in his life, but he has a nose for dead things and likes to carry them around.

“You have to go apologize to the neighbors,” I say.

“We have to apologize,” I argue. “Say this: I don’t think that Winston is capable of catching a chicken, but he had one and we’re sorry and will make it right.”

“Okay…” Said with a deep sigh.

She made the walk next door to the neighbor’s house. The neighbor was very kind. They counted the chickens together and none were missing. Hmmm. So where did Winston get his chicken?

When I got home, I walked the yard looking and sniffing for the carcass. I walked it twice and the chicken was nowhere to be seen or smelled. Winston sat smugly on the porch, awaiting the bath required to come back into the house. My daughter, Jenna suggested we let him off the porch and watch him from a window to see if he would go back to it. That education is paying off!

He did. After waiting to make sure we weren’t watching (he literally looked both ways like a criminal), he wandered down into the woods and picked up his prize chicken. I went down to take it away and figured out immediately why it wasn’t one of our neighbor’s chickens. Because it was a rabbit. I am certain that Winston didn’t catch this either. He just found it somewhere. But he was proud of it and very distraught when I took it away for disposal.

Now my wife is a smart lady who can differentiate between a chicken and a rabbit, except when we hit Threat Level 5. Then all bets are off. She has cleaned poop stains from walls and vomit from every surface in the house in her role as mother. But dead animals… evidently those are mine… especially when they are chickenrabbits.

We’ve had fun teasing her about her chickenrabbit. She’s fine with the mockery only because it is gone now.

And Winston? He’s back to his old, sleepy self. The excitement is over until he stumbles onto another carcass. I wonder what that one will be! 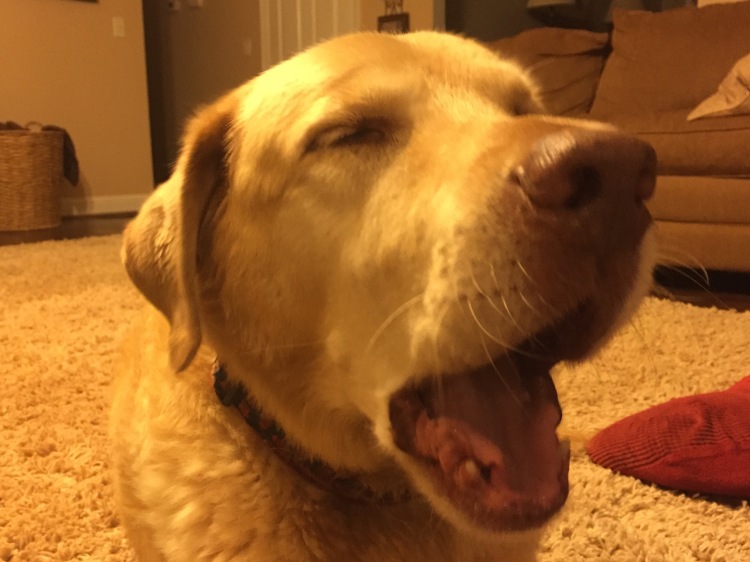 10 thoughts on “Winston and the Mythical Chicken”