“Those are some mighty fine chords,” I said, obviously not referring to his non-existent pants.

He looked me up and down with disdain for my absolute lack of nakedness. In the cold, his skin reflected a certain bluish tint. I tried not to stare, because that’d be weird. Odd that a man dressed only in tidy-whitey’s somehow fits in here.

“You play?” he asked, lowering the brim of his hat to hide his eyes.

“Not from around here, are you?” he asked, stating the obvious. It’s one of those things a cowboy says in an attempt to intimidate his adversary. No way I was backing down. I stared at him to let him know I was unfazed… but I kept my eyes well above his elastic waistband.

“Nah, I’m just in town for the weekend,” I answered. “Ever let anyone else play that?”

“Nope, especially not some dirty hayseed from Mississippi.”

People were gathering in hushed anticipation, keeping their distance in case things got ugly.

“Georgia, and I’m clean. Showered before I got to this filthy place.”

I could see a trace of a smile from under his hat. It wasn’t much, but it was there. “What d’they call you?”

“They call me… Bubba,” I answered proudly. “You gonna let me play that thing or not?” 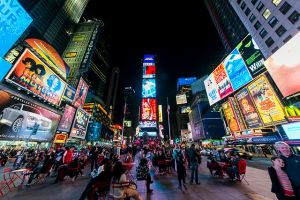 “What are the stakes?”

“There have to be stakes. Like the song: The Devil Went Down to Georgia. Only you came here.”

I didn’t like the insinuation, but couldn’t quite figure out if he was calling me Satan or just mocking me. He talked too dang fast.

A man standing in Times Square in only underwear just threatened me with humiliation. Strange place, strange times.

“If I win, you strip down and have to play for an hour while I take a break,” he offered. “And I get the tips.”

I scanned my surroundings. Lights, screens, shops, stores, foods of every kind. This was New York City! I could ask for the world. Anything. As I looked around, only one thing crossed my mind. Naked Cowboy watched me haughtily, wondering what I would suggest. I knew it in an instant… It was what we all needed.

His face dropped and showed a reticence to take the offer. Naked is his thing, his schtick – it is nearly all he has besides his guitar. He looked sharply at my fingers, searching for callouses that would betray a guitar man. I deftly hid my fingers from his eyes.

“You’re on!” he snapped, deciding I was bluffing.

He played his best tune and the people loved it. This was going to be tough. When he strummed the final note, he arrogantly whipped the guitar over his head and handed it to me, which left him that much more naked and me leery of holding it too close. Undaunted, I played. I gave it my all. I played until I wore right through the strings. People gasped, then cheered at my finale. The cowboy? Oh, he knew he’d been beaten. He reached next to his case and pulled out an orange t-shirt and a pair of baggy jeans. Slowly the clothing came on and he was less “out”.

I like to think I made an impact. In a small way, I cleaned up a little piece of New York. There is a long ways to go! I mean, something has to do be done with the dirty Elmos who accost you if you get close.

Obviously this is mostly fictional. I did go to NYC and I did see Naked Cowboy. However I could never hang with him, nor would I want to.

11 thoughts on “A Duel with Naked Cowboy”