There was a brief window of time when I considered myself stylish. I tried to match up to the men on TV although I could never muster that perfect quaff of hair. No matter how much product promising ultimate waves I used, my hair just lay there disappointingly flat. But clothes – well, I can buy clothes.

Somewhere along the line though, one’s cheapness intersects with the price of the fashion icon he is trying to emulate. When I was young and carefree my intersection point had a higher limit. Then I got married, had children, and was forced to adopt a budget. Even at my highest level, I never had a Ralph Lauren goal. He is too far up the scale. I aspired to reach that Samuel L. Jackson “look good in anything” vibe but settled in somewhere around Jerry Lewis.

Now I flat out don’t care. If I like it and the price is right, I buy it. I don’t believe in recreational shopping. I have to need something before I shop. Seven work shirts worn in the proper order are enough because no one remembers what you wore a week and a half ago. My eye for matching clothes died along with my hearing.

I also think my love of tie-dye lead to the demise of my ability to tell what goes with what. At some point, that random mix of colors flows off the shirts and into every fashion decision. Now tie-dye is more of a style philosophy than just a hippie shirt I own. I have become style-ish instead of stylish.

My oldest daughter gave me sage fashion advice before she left for school:

Dad, if you think it is a good idea, then don’t.

Let that sink in.

Monday I forgot that I had a Top Golf outing after work which necessitated a change of clothes. With no time to go home and grab something to wear, I found myself in a fashion conundrum. Never fear, beside my office is an outlet mall! At lunch, I hit the mall with three needs: shorts, shirt, and shoes. Of course, my goal was to spend as little as possible whilst acquiring items that would match… somewhat.

After running through all manner of stores, I started to get confused by all of the choices and gave up on one criteria – that they matched. I just wanted out of the mall, so I began hitting the clearance racks for cheap. There is strange stuff lurking on the clearance racks of outlet malls.

Finally, I found my ensemble just before I nearly passed out from MOE: mall over-exposure (which I think should be a real syndrome for middle-aged men just behind hair loss and ED.)

The golf outing went well. No one commented on my outfit – perhaps they were awestruck by my individuality. My wife, who had been enjoying my escapades vicariously as I detailed them over the phone, said she liked each of my selections… independently. Being kind, she stopped there with a grin that told me that together they clashed horribly.

Shopping is kind of like panning for gold: Sometimes you pull up only sand and dirty water no matter how many times you dip your pan into the sales rack.

But sometimes… well sometimes you land a nugget of gold, like these shoes which I will wear everywhere! 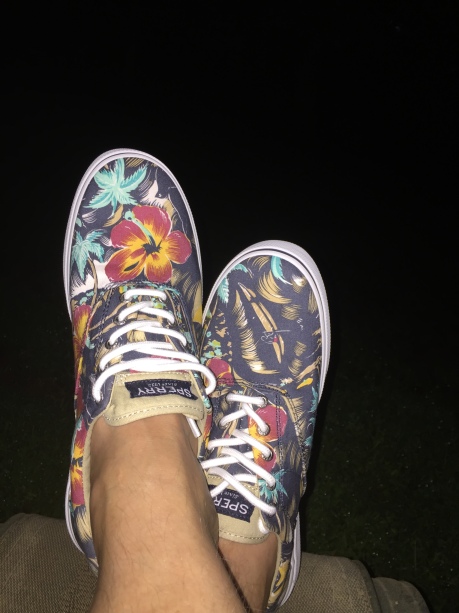 If those don’t make you smile, you must be defective!

All in all, it’s nice to not be a slave to fashion. I’m perfectly content being hopelessly style-ish.