Cue the Led Zep, let loose some fragrant belches, drag your nose across your sleeve, and get ready to scratch something! It’s Car Day, YES! The manliness day of the year that doesn’t involve a chainsaw. YES! Line ‘em up – three cars, three oil changes and a brake job. YES! Can you just feel the testosterone surging?

I felt it yesterday – a perfect Saturday for Car Day. I drove to the auto parts store to get my supplies and surround myself with other manly men. I didn’t shower, I wanted some manstink. I plopped brake supplies and three jugs of motor oil on the counter, grunted a few times, and swapped tales of bravado with the snaggle-toothed clerk. Yes, a day for men, indeed. 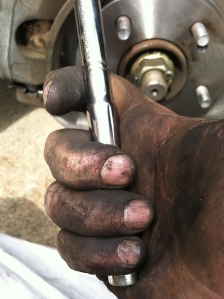 I love working on cars but there are only about four things left I can do on today’s automobiles. If anything else is wrong, I can only raise the hood and say, “hmmmm” before calling a tow truck. But on Car Day, I get to use my limited knowledge (aided by YouTube) to be a master mechanic. I refuse wash my hands after. Even though Car Day plus one is Sunday, I leave the black gunk under my nails. When I shake the preacher’s hand, he’ll know: ‘That’s a car guy.’ Oh yeah.

I started with my truck, affectionately called the Blue Pearl.  After I drained it and changed the filter, I checked three times to make sure the plug was re-installed. I’m very diligent to check ever since the unfortunate day I poured ten quarts straight through the engine and onto the pavement. Yes, the plug was in this time. Car one complete.

Our van, Russell’s oil change went quickly. Next was Kevin, our oldest daughter’s car. I don’t like to drive Kevin, mostly because of the frilly, purple monogram on the back. Not so masculine. This would be my inaugural oil change on Kev. I surveyed the little white car, noticing just how narrow the gap between it and the ground. Man, it was low. All of the sudden, I remembered ramps! I have ramps and rarely get to use them. Car Day just got better.

I set the ramps at the edge of the concrete, inched Kevin up to them, checked their position, and proceeded to roll right over top of them. Uh-oh. Now the ramps lay wedged between Kevin and the ground with his front wheels dangling in the air. That’s bad.

I’ve heard of superhuman strength caused by adrenaline rushes in life-or-death situations. Maybe that would work here. I spit on my hands and rubbed them together before lifting  just because it looks tough when they do it in old movies. Abject humiliation must not qualify as a life-or-death situation because I couldn’t make it budge. I gave up and let it sit there a few hours while I pondered. A neighbor’s garage jack came to the rescue.

My machismo waned mightily. Don’t tell the guys at the auto parts store, but I decided to bag it and go to Quicklube where a young man with a tattoo of Charlie Brown shooting himself in the head changed my oil.

“Nice decal,” he chuckled as he wrote down the license plate number.

“Just change the oil,” I replied gruffly, hoping to salvage a slice of manhood.

He complied and descended to the pit underneath me. “Dude, where’d the yellow come from?” he asked when he discovered scratches left by my ramps.

“No, it ain’t crap,” replied Charlie Brown’s killer, wiping at the marks. “That’s like, paint. It ain’t coming off. But how’d it get down here?”

14 thoughts on “The Manliest Day of the Year”