I consider myself a war buff. I love reading historic accounts of combat. I don’t discriminate between time period or conflict. Because of the volume of material, I have probably spent more time delving into World War 2 than any other. When I was in the Army, I drove a beat up WW 2 era Deuce-and-a-half and always wondered about its history.

Historians argue about which battle is the greatest – Waterloo, Stalingrad, Hastings, Yorktown, Thermopylae, Guadalcanal, The Battle of the Bulge, the list goes on. Like everything else in life, no one can seem to agree. When compiling such a list, the qualifiers become important. Things such as lives lost, duration, strategies, and conditions all come into play when deciding which is supreme.

It’s not that I don’t have an opinion, I’ve got plenty of those. I just don’t like to argue in general. I get distracted or flustered and lose my place like when I drop my book and reread the same pages over and over again before I figure out where I left off. Only an argument is live, verbal combat. When I lose my place, I sit there open-mouthed wondering if I look as stupid as I feel. So like everyone else on the losing side, I hone in on one point and try to drive it home even if I am totally wrong and know it.

The Baltic Sea is in New Mexico. It isn’t? I will repeat that thirty-seven times, forcing you to get out your phone and Google it, which allows me time to escape the fracas unscathed. I’m gone, therefore I win.

This leads to my opinion of the greatest battle which I believe is a conflict going on today – right now! RIGHT NOW!

You might think I am waxing philosophically about a moral or ethical conflict for the hearts and minds of people. Think again, I’m nowhere near deep enough for that. No, I am talking about the Battle of the Christmas Tree going on in my den as I type.

This battle has two combatants: The cats vs. the presents. The cats investigated the tree the minute it arrived. They united their forces and conquered it quickly. It is now their territory and they are very protective of it. The two of them alternate on watch and have made a formidable occupation force. Their confidence never waned… until the presents arrived. 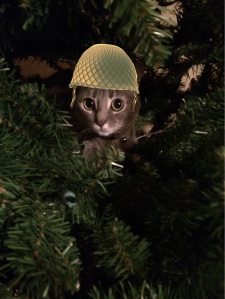 As presents do, they marched in slowly but steadily. They landed through the front door and also surprised the occupiers from the garage entrance. Strange men in brown uniforms delivered them, but some were brought in by the woman-thing who seems to be working for both sides. She pets and feeds the cats, yet adds to the stack of presents assaulting from every flank. She is a crafty sort. Worse yet, she puts little ribbons on top to lull the cats from their strategic high ground. They can’t avoid the ribbons, which are almost as alluring as the ornaments with bells.

I have no idea who will win this battle. Epic is too small a word for it. The cats seem to rule the night while the presents hold the day (sounds like a Billy Joel song). It is a seesaw affair likely only resolved by the Take the Tree to the Chipper Treaty.

That landmark agreement is coming soon. Until then, may peace reign in your home unlike mine – where it appears to be an elusive dream.

9 thoughts on “The Greatest Battle”